I am showering you with blogs today! April showers. See what I did there? It’s April now.

Lisburn has been really disappointing recently as far as magical geeky shopping is concerned – I suppose it doesn’t help that all the shops are closing. I’ve seen a few wee bits and bobs I would rather like, though. I thought you might like them too, although I’m not convinced all of them are geeky enough to warrant blog coverage. Still, they’re nice, you might like them. Bear with me.

The pictures are giant, to make my blog look nice and colourful. And to make you think this is longer than it looks, because I am crafty that way. First up, this framed poster. It’s both adorable and geeky, because it references Twitter. Geeks like Twitter, almost as most as C-list celebrities and comedians do. I only meant to take a picture of the one poster, but I seem to have caught a second, equally adorable one in the bottom right. It’s mean and sarcastic.

These works of art were in TK Maxx (Lisburn). They’re probably not there anymore, but there’s usually a great variety of every-changing oddities in that place, so it’s always worth a look.

And we come, inevitably, to Primark. This time last year you couldn’t move in Primark without walking into something with a Bat-symbol on it. However, the times have changed, and Batman isn’t ‘trendy’ anymore. It’s okay, Bruce. I still love you. While ‘geek-chic’ is finally over (don’t get me wrong, it was handy, but there’s nothing I hate more than a chav or a skank with a Superman t-shirt), there are still a few precious gems to be found. The picture above (another Twitter reference, obviously) is from a pair of girly pants. Adorable.

Boys, zone out for a moment. Thank you. Ladies, have you noticed that Primark have changed their pant sizings? You can now either get them in ‘too small’ or ‘too big’. I do not like this, not one little bit.

Sorry. Back on track now.

I am aware this is not remotely ‘geeky’ (unless you are passionate and enthusiastic about ice-cream…which come to think of it, everyone should be), but so cute! And it smells like summer and sugar and everything nice. I’m just so glad that winter finally appears to be ending, that I am suddenly attracted to everything yellow and shiny.

Okay okay, so again, maybe not super-geeky, but who doesn’t love a nice pug? Look at that face. I am mad about cushions, but my boyfriend doesn’t see the point of them.

Maybe he’ll read this and realise that I’m rather upset we don’t have more snuggley lovely cushions on our sad, cold sofas? Maybe? Hello? 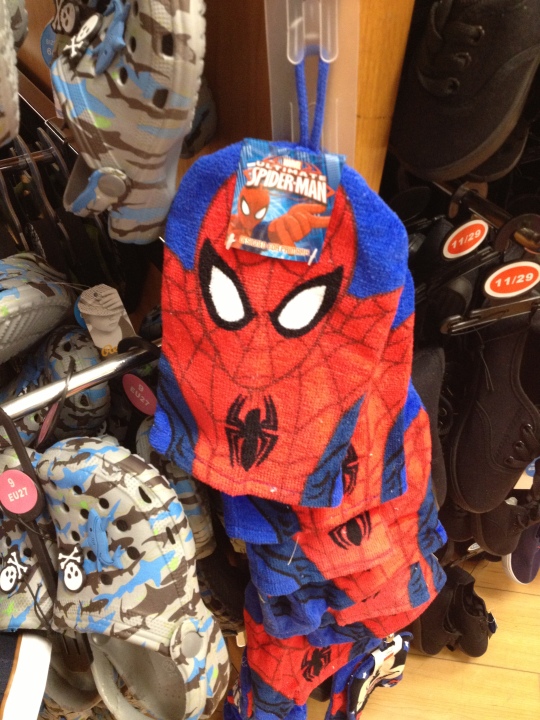 And finally (still in Primark, by the way), there is this thing. It’s a shower glove? Face cloth pocket? I don’t really see the point of these things at all, but mostly they’re for children, so I don’t really think about it. I think this one goes under the name ‘wash mitt’. Good to know. Anyway, it’s only £1 and has Spiderman on it, so it must be worth owning.

So, that’s your lot. Mini-findings. I intend to have a good hunt around Belfast at some point this week, as places get their Spring/Summer stock in around now, so there could be a Batman themed stationary set that I’ve never seen before. How exciting!

That was only a little bit of sarcasm. I really like stationary.